Royal County Down has been called “The Augusta National of Ireland” and is ranked the No. 1 course in the world, according to Golf Digest’s World’s 100 Greatest Courses.

Needless to say, tee times are at a premium.

Now is your chance to play this fabulous course in Northern Ireland.

Due to the immense interest in Northern Ireland generated from the 2019 Open, Royal County Down has been deluged with requests for tee times. In response, Royal County Down is opening the course in October 2020 (it’s usually closed during this time).

Most of the Royal County Down tee times are already sold out for May to September, so this announcement opens up a world of possibilities.  Golf travelers can play Royal County Down and other great nearby courses like Royal Portrush, Ardglass and Ballyliffin. For many golfers, though, Royal County Down is the absolute must play in Ireland. Stunningly photogenic and challenging, the course is set on natural dune-land at the foothills of the Mountains of Mourne in Newcastle, about 30 miles south of Belfast.

Opened in 1889, Royal County Down was designed by Scottish school teacher George L. Ballie (who laid out the first nine) and Old Tom Morris (who laid out the second nine) with later tweaks and alterations by Harry Colt, Harry Vardon and Donald Steel. Stretching out before you like a Monet painting come to life, the course is colorfully accented with purple heather and yellow gorse.

If you want to play Royal County Down next October, act now as these tee times are expected to “fly off the shelf”. Call 866-260-4409 today. Ticket + Train to The 2020 Open Championship 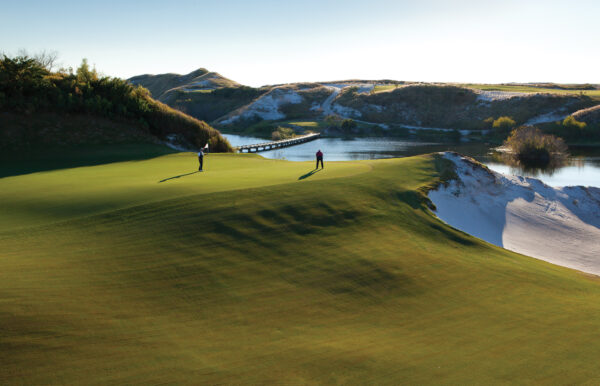 Tee Up Stateside – Driving to Play By USA Golf Region